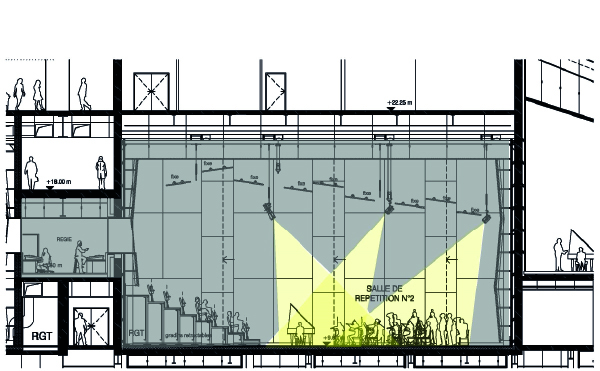 Part 1 was going through the aspects that would make successful the acoustic design of music rehearsal rooms.

Part 2 dived deeper into acoustic design with some tips for the planning of such spaces.

Part 3 here goes through other general considerations for rehearsal rooms, including:

It was written by Duck Sceno (Theatre Consultants) with some contributions from Atelier Crescendo.

Answering the needs of the main performance space

Each type of performance venue has specific needs for the rehearsals.

Atelier Crescendo’s comment: If the rehearsal room is part of a larger facility, it might be wise to locate it away from other sensitive and/or noisy areas (such as other rehearsal rooms, performance spaces, recording rooms, music practice rooms, etc). This way, you minimise the acoustic interferences between the spaces when they are used simultaneously.

Of all the performances, opera and symphonic music are those that remain the most traditional because they are linked to a majority of old musical works, with an audience made of specialist who does not always want to make this art accessible.

Operas can be more accessible because they follow the codes of theatres, that are more democratised, with the spectators facing the stage. People can be more or less seduced by the show. However, they can listen to the music, see the acting and can even sleep (!!) because no one is looking in their direction.

Symphonic music is in itself more difficult to access. The orchestra is the only visual show. There are no sets, no costumes, and the audience surrounds the performers. This allows anyone to watch the yawning and sleepy novices and any other attitudes that would not be appropriate.

The rehearsal room can facilitate access to new audiences

High urban densities of large cities have forced the construction of new performance venues outside of the city centres and far from their historical audience.

Between the venue and its adopted neighborhood, the rehearsal rooms are becoming places to gather and exchange where local amateur orchestras and younger musicians can play.

It is also an opportunity to open the building to a new audience and create links with it .

The rehearsal rooms should therefore be made very accessible on the ground floor at lobby level.

Providing comfort to the musicians

Transparent, windows and/or glazed façades bring natural light and therefore extra comfort to the professional musicians for whom the rehearsal rooms are actual working places. They also allow the public to see what happens inside.

When professional musicians are not rehearsing, these rooms can turn into incubators for young future talents who will come to practice together.

Rehearsal rooms must be able to transform into small / informal performance spaces.

They need to be able accommodate unexperienced audiences installed in a frontal configuration, with a clear separation between the stage and the audience, to focus more on music and its feelings.

Concequently, the rooms need to achieve scenographic, acoustic and safety requirements. It will be necessary to design and study the installation and the sightline of the audience, the concealment and the control of the natural light with curtains and lightlock accesses.

Atelier Crescendo’s comment: the acoustic contribution of the seats will also need to be considered.

A control room, part of the technical infrastructures, might be useful with open access to promote creativity and inspire future performances.

The acoustics will have to be variable according to the use of the room (it is for a rehearsal or a show? with or without an audience? with a small or a large orchestra? with amplified or purely acoustic music?).

Like any space open to the public, it will be necessary to study the number and the dimensions of the accesses and the circulations.

The installation conditions for the public with emergency lighting and signage, and taking into account all the publics including people with reduced mobility.

The function of the rehearsal rooms is important. Their technical aspect is even greater as their “small” size requires optimisations. Their need for a high flexibility requires specific studies and mixed infrastructures. Rehearsal rooms are not always considered at their fair value in briefs / programs and budgets, in France and on international projects.