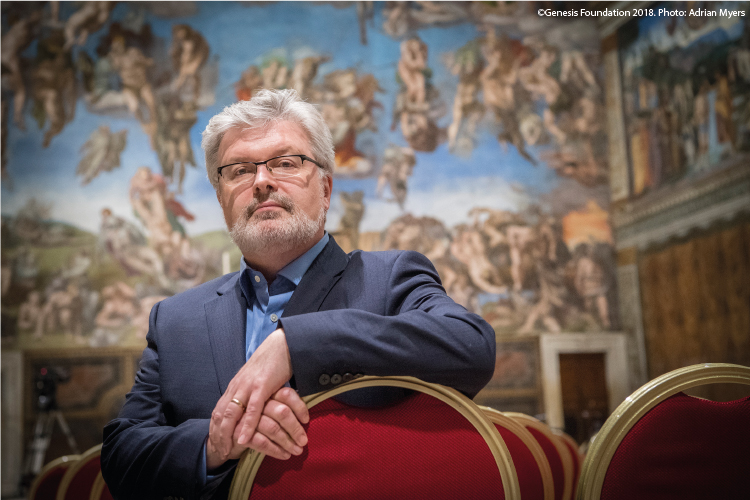 In the first part  of this interview, James was telling us about his origins, where his passion for music comes from, and the music festival for which he is the founder and artistic director,The Cumnock Tryst. He also talks about his involvement in music education, his vision for teaching music composition and his opinion on why acoustic design is so important for music schools.

MF: What are your experiences and opinions on the acoustics of music venues?

There has been a revolution in thinking how we approach pre-baroque music both in instrumental music and choral music. That has involved a historical way of thinking and researching what the instruments were like, what the venues would have been like and how various music would have been performed.

A few years ago, The Sixteen (conducted by Harry Christophers) and a string orchestra (the Britten Sinfonia to begin with) were invited to the Sistine Chapel in Rome to perform a piece that I wrote. Now, not many modern performers go to the Sistine Chapel and know what the acoustics of the Sistine Chapel are like. It is not heard much, it is not a big place, but it is where the likes of Palestrina would have directed his choruses. Palestrina and Lasses, who just came to pray, made their great masses just for that space. Yes, the music is shaped by that liturgical, theological and religious aspiration, but the acoustic of the chapel is just as important. The music has to unfold at a certain pace. It can’t be too fast, otherwise it would get lost. It had to be heard properly as it was made at a time where ecclesiasticals were getting worried about people not hearing the words properly.

When we turned up a few years ago to perform the Stabat Mater, no one had any idea of what the hall would sound like. However, as soon as they started playing and singing, I saw the delight and the relief on the musicians faces when they realised what a wonderful space it was. That was an incredible acoustical experiment for all of us.

I also entered the choir gallery where Josquin des Prez had been and Palestrina had sung. Even Allegri who wrote the great Allegri Miserere had been heard by Mozart in that very space. All those musicians had been there before, and there was one wonderful moment when I returned to the little choir garden. I saw Josquin des Prez’s signature scribbled onto the wall. He had written “Josquin was here”. An amazing moment for a composer who loves that tradition and history.

There are some spaces that work incredibly well for certain types of music and singers, whilst others suit instrumental music better.

Orchestral music works better in places like the Concertgebouw in Amsterdam or the Musikverein in Vienna. They are regarded as almost near perfection for music of the classical world, especially for music of the 18th and 19th centuries. I certainly hold up these places as the perfect example.

The more modern halls in the UK that work for me are the Bridgewater Hall in Manchester and of course the Symphony Hall in Birmingham. They are the two best halls musicians talk about in the whole of the UK. Musicians much prefer to play there than at the Barbican, in London, or the Royal Festival Hall at the Southbank Centre that are regarded as problematic acoustically (for more information,  read What is Wrong with London’s Concert Halls https://acousticengineering.wordpress.com/2015/03/09/what-is-wrong-with-londons-concert-halls/ written by Trevor Cox). Up here in Scotland, another problematic hall is the Glasgow Royal Concert Hall which lacks the warmth and the depth that the Symphony Hall and the Bridgewater Hall have.

MF: What are your most memorable venues, not just for acoustics, but also for the internal comfort?

JMM: I must single out the Concertgebouw as a very special place. Every musician I know loves performing there. I have conducted there a few times. I have conducted my own music, I have conducted other composer’s music, older music, choirs and orchestras in there. I have also heard choirs and orchestras, sometimes separately sometimes together. It is a very special place, and not just for what you can make of the acoustic. A musician can feel at home in a place like that, the accommodation is very spacious backstage. You can prepare well and there is a wonderful sense that you can relax into the space for rehearsals and prepare psychologically. You are made to feel at home. The initial and sole purpose of the place is for making music excellently.

The conductors have very good spaces. I love the fact that when I go there, I have a very private and comfortable space where I hear nothing. I don’t hear the musicians rehearsing, I am away from the audience and I can be in solitude, which exists until the very moment I go onto the stage. Having that sense of isolation before you go on stage is vital because you live in the music. It is just you and the music, anything else is a distraction. Every conductor has their own way to prepare psychologically for stepping onto the stage. Some do yoga, some contemplate, some pray. It requires a kind of emptying out. You engage with silence, because in that silence you encounter the music, and when you go on stage with only the music in your head, you can perform better. The way a musician prepares is so vital, whether it is a conductor or even an orchestra member. You have to be in a good frame of mind in order to perform at your best. So maybe that is another design aspect to take on board: giving the opportunity to prepare well.

MF:  The Concertgebouw is shoebox-shaped. Another very popular hall shape for concert halls is the “vineyard” shape. Have you got any experience in conducting in these sorts of halls?

JMM:  I have less experience in that kind of hall and I hear different accounts of which halls are good or not. I have heard very different accounts at the Elbphilarmonie, in Hamburg. Some who love it, some who don’t. I don’t know what to make of that. I suppose there might be a little bit more nervousness amongst musicians about that particular shape. I don’t know why but I certainly have less experience of the vineyard shape.

MF: Finally, times are pretty tough for the performing arts world at the moment. How have COVID and lockdown affected you and your activity? (reminder that the interview was done a few weeks ago)

JMM: In some ways, some things haven’t changed. I am a composer and I need silence and solitude to go on with writing music. In a sense, lockdown is life as normal for me and that is the case for most composers. But we don’t live in a bubble, we don’t live in splendid isolation and we know that writing music is a statement of hope for the future.

It is a statement of hope that will go into the hands of interpreters who will then express that music and communicate its message and its meaning to an audience. One writes in a splendid isolation but it is writing for the future. One is writing for ones furloughed or redundant human beings otherwise it is pointless.

Although we live and work in silence, it is not an island of no communication. It has a breathing ground of thought and creativity that eventually is able to get the music out there. So, in that sense, life goes on as usual.

However, all my performances have come to an end. For every performing musician, nothing is happening. Certainly not in this country. Things are beginning to open up in other countries. I noticed that there are performances in Austria. Some people have been in touch from Denmark and France recently. Even in Wuhan, life has got back to normal with big concerts. These are messages of hope. If it is happening elsewhere, with caution in mind of course, one hopes that life will come back here. I suppose the green shoots are also happening in places like Wigmore Hall which has come back to normal with chamber music concerts performed to smaller audiences.

I met my first orchestra for the first time a few weeks ago. We recorded the video and the audio of new music from young composers that the orchestra will put on its website. I have a recording session with an orchestra for BBC Radio 3 in a few weeks in London. These are incredibly exciting moments and hopefully there will be more in the months to come.

Once a month, Atelier Crescendo sends information such as recent activities, the last posts published on the Acoustic Blog, some acoustic tips, a review of some products recommended for acoustic design and some upcoming events/webinars.