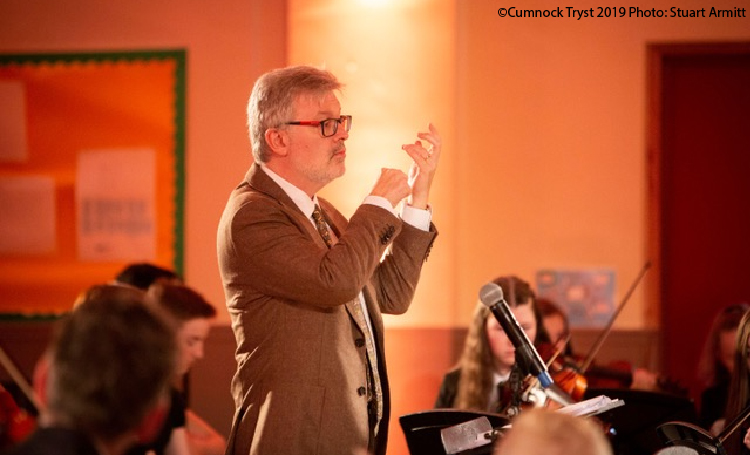 Back in October, Sir James MacMillan very kindly accepted to answer my questions and I can’t thank him enough for this.

This interview has been split into two parts.

In the first part (here), James tells us about his origins, where his passion for music comes from, and the music festival for which he is the founder and artistic director, The Cumnock Tryst. He also talks about his involvement in music education, his vision for teaching music composition and his opinion on why acoustic design is so important for music schools.

MF: Hi James, first of all, thank you very much for accepting to take time for this interview. Can you introduce yourself?

JMM: My name is James MacMillan, I am a composer, a conductor, a bit of an academic and more recently I formed a little music festival in Ayrshire (Scotland) called the Cumnock Tryst. I am the founder and the artistic director of it.

MF: Can you tell us a little bit more about the Cumnock Tryst?

JMM: Yes. I come from Cumnock originally, which is the little village where I grew up. It is in the Eastern part of Ayrshire, to the south of Glasgow. Its background and economic traditions is coal mining, but of course that doesn’t exist anymore. My grandfather was a coal miner, like many men in the area all through the 20th century. During that time he also played music. He was a euphonium player. He played in local brass bands and he sang in his church choir. So, there was an experience of music and a love of music in that community. I remember, it is because of his influence that I wanted to become a musician. He got me my first cornet and took me to my first brass band rehearsals.

Ayrshire is nowadays an area of multiple deprivation. It is not a place where you would expect a high-class arts music festival. So, it raises eyebrows when people see that all this wonderful musical activity is happening there. But it is a place that I remember to be a very musical place and we believe everyone should have access to music, not just those who can afford it. That is part of the ethos that drives what we do.

We bring the great musicians of the world to the Cumnock Tryst. The Sixteen conducted by Harry Christophers, one of the great choirs of the world, has been a few times, the King Singers and the Westminster Cathedral Choir have been. We are working with the Scottish Chamber Orchestra who were going to play this year. We will get them next year.

We have also formed a festival chorus with a lot of local people. This is the on-going project at Cumnock, to bring great music from around the world, to install and continue that musical activity in the area.

With the arrival of the new school [the Barony Campus], our hope is that it will be a catalyst, now that we will have a space to bring larger groups to the town.

MF: So your aspiration for the future is to bring people from different ages and different levels together?

MF: What types of music are performed the Cumnock Tryst?

JMM: All types. Because there has been a strong experience in the area through the generations of choral music, we decided to make choral music quite a regular feature. We get these great choirs coming and we get our chorus singing at their higher level. We have a very wonderful choral director who comes and works with this chorus, and they put on very high standard performances every year.

The British brass band tradition was very strong in the area and it is a tradition that is very much associated with industrial heritage and industrial experience. All the coal mining areas of Scotland and the north of England had high-class brass playing. It is a very particular music culture and we want to feature that with a lot of brass music in the festival.

But we don’t stop there. We realise that chamber music and recitals are very important, so we have some major solo artists who come and play. Steven Osborne, a great pianist, came last year for example. He played Beethoven’s last three piano sonatas as a recital. Nicola Benedetti, who is a patron, (she is from Ayrshire originally and has come a few times), played solo violin (the solo Bach music for example), but also brought a trio and played Ravel, Brahms and so on.

The festival is quite wide-spread and we branch out a lot, we’re bringing a lot of folk musicians from Scotland and elsewhere to perform.

MF: In which venues is the festival organised?

JMM:  We use small venues with very small capacities. Most have three hundred seat capacities, which is fine. The local churches are very good. There is one in particular that has a wonderful acoustic for choral music. People love these venues. There is an attraction about the 19th century churches; they are very beautiful. Some of the local town halls and village halls are also used. Again, they are small with capacities of 180-200 seats.

But we can still have some sort of recitals. Ian Bostridge, a great English tenor, did a recital to an audience of about 180 in the New Cumnock town hall. He had a mixed program of Mahler, Britten and Schubert.

Although we want to maintain the intimacy of these places, we do want to be able to bring orchestras and larger ensembles to the town.

MF: Can you tell us about your involvement and vision in music education?

JMM: Over the years, I have had an oblique relationship with academia. I have had a life in the past of teaching at universities, but because I conduct a lot, in normal circumstances I would be travelling to different parts of the world to perform, so I haven’t been able to maintain regular teaching in conservatoires or Universities.  Although I always want to conserve some link, as it is important for me to have a link with academia.

I have a visiting professorship at the Royal Conservatoire of Scotland in Glasgow and at the University of St Andrews. I give more of a musicological and theological input in the form of seminars.

Over the last thirty years or so, the British orchestra have been trying to build a new way of working with British schools, which involves not just players but also composers. Instigators are invited into the classrooms to try to encourage composition and creativity, and I have been part of that.

It sometimes involves a freedom in the concept of creativity, there is a lot of improvisation that happens initially. The compositional inspiration can be encouraged by improvising and this is a new way of thinking. It is not a general concept that is accepted worldwide, certainly not in other parts of Europe, and it might be seen as lacking some kind of intellectual discipline.

However, I find it a very useful way not just to engage people with the immediacy of making music, but also to inspire potential composers to think outside the box about how music is made.

I think it can help many types of musicians at different levels of music-making. We have worked with very young children and have tried to make it fun. We have worked with secondary school kids as well as high school kids. We have a project up and running that we are doing through Zoom at the moment, where teenagers are encouraged to write their own music. It has become a major part of what we are doing at the Cumnock Tryst and once we get back to some sort of normality, we will be able to get back into the classroom, doing not just proper improvisations, but actually encouraging them to develop a knowledge of notation. It is not one or the other, it is not free jazz, it is not just free-thinking. It is free to an extent, but we are trying to link it to quite a solid intellectual basis.

MF: How do you find the quality of the music spaces contribute to the musical creativity, the music education and the music performance?

JMM: It is very important for young musicians to sound good in the early stages of their musical development. If they sound good on their instrument, in their voice, in their choir, in their ensemble, to their peers, to their parents and to the local audience that comes to listen, then the delight of music-making is enhanced. And that delight is part of what motivates a young musician to continue.

So, it is vitally important to get the acoustical design right in an educational setting. It should be worked to basics. It should be one of the central considerations in any new build whether it is a school, a community centre or something else. And although we may voice this on the side-lines, we know we don’t have any power, people like myself must continually make up a case for acoustics to be a central educational consideration.

Once a month, Atelier Crescendo sends information such as recent activities, the last posts published on the Acoustic Blog, some acoustic tips, a review of some products recommended for acoustic design and some upcoming events/webinars.