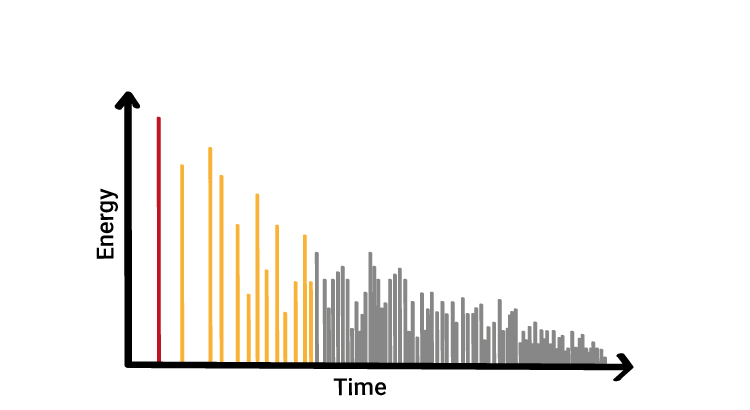 Do you work on building projects and would like to know more about sound reverberation so that you can better understand part of the acoustic design? Then this series of posts is for you.

Part 1 (here) takes you through the very basics of sound reverberation including:

Part 2 will shed light on some specialist indices used for the design of spaces for spoken and/or musical performances.

And finally, Part 3 will explain some of the basic principles of reverberation control.

What is sound reverberation?

Reverberation happens in a space when the sound of a source is reflected into multiple reflections. They build up and decay as they are absorbed by the surfaces and the furnishing.

The reverberation characteristics of a room make its acoustic footprint. A little bit like an instrument responding to an excitation with its own timbre.

Sound reflections are often represented as rays traveling in different directions and arriving at different times. Each ray transports acoustic energy and loses some amount as it travels through the air or hits an obstacle.

The sound reverberation in a space depends on a few different aspects including:

The ideal reverberation conditions for a room depend on its use. Some spaces (like classrooms or recording studios) need rather “dead”  reverberation characteristics. Others need a medium reverberation (like assembly halls, theatres for drama, concert spaces for amplified music, etc), whilst others work best when they are very reverberant (large symphony halls for acoustic music, spaces for choral music, etc).

How do we measure sound reverberation?

You can generally study sound reverberation by analysing how the sound energy evolves in a room after a short sound burst or after a source is interrupted (there are other measurement methods but they won’t be discussed here). Its basically observing how a room behaves under a sound excitation.

You can analyse the reverberated sound energy in different ways:

From the representation of sound as rays, you can come up with the diagram to the right commonly called a reflectogram:

Note: Most buildings are acoustically designed for people to be able to hear, communicate, concentrate or even rest comfortably. So because the human ear is more sensitive at mid-frequencies and the human voice emits sound around the mid-frequencies, the acoustic designer generally concentrates on the reverberation conditions at 500 Hz, 1000 Hz and 2000 Hz.

Sometimes, it is also important to control the reverberation conditions at low frequencies. This is discussed a little bit more below.

Depending on the use of a space and the acoustic characteristics you want to concentrate on, you can either isolate or combine the above aspects.

For example, you can:

Note: the above examples come from very standardised processes, and for ease of understanding, they have been simplified. More details are given in Part 2 of the series.

All the above aspects are quantified with particular acoustic indices that are psychoacoustic based.

Part 2 (published soon) will present some specialist indices that are very useful for the design of spaces for spoken or musical performances.

Note: you can find more details in the following documents that were reviewed to write these posts:

The reverberation time (RT) is the one index that acousticians use to rate or design reverberation characteristics. Practically, it tells you how long it takes for sound to disappear in a room.

In more technical terms, you analyse the impulse response and measure how long (in seconds) it takes for the acoustic energy to decay by 60 dB.

Hence Tmf  (used for example in education spaces) which is the average of the reverberation time values at mid frequencies.

Sometines, it will be important to consider the reverberation time at frequencies lower than 500 Hz.

For Special Education Needs (SEN) classrooms, specific design requirements are in place in a wide range of frequencies, including at the frequency bands 125 Hz and 250 Hz. This is because too much low frequency reverberation can mask the sound of the teacher’s voice and make it harder to clearly hear what (s)he says (see Acoustic Design of SEN (Special Educationnal Needs) classrooms  for more information on the acoustic design of such rooms).

The table below shows some examples of preferable reverberation times for different spaces and music repertoire.

Note the different frequencies you need to consider depending on the situation.