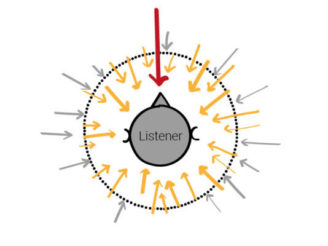 If you design a new performance space, you want to know how the musical or speech-based activities will be heard.

Or similarly, you might want to establish the acoustic conditions of an existing performance space.

As part of the assessment, you generally need to ask yourself:

Part 2 here goes through some specialist acoustic indices that help to objectively answer the above questions.

Rather than showing very technical data and complicated formulas, it intends to shed some light on which parts of the sound reverberation are used to assess the acoustic qualities of a space.

Note: this post is based on the following documents:

As its name says, the EDT is a measure of how fast (or not) the early sound energy decreases in a room. The quicker the early reverberation dies, the shorter the EDT.

Technically, it is based on measuring how long the early energy takes to decay by 10 dB (excluding the direct sound from the source).

The EDT is very often used for the (re)design of music performance venues and relates to the perception of acoustic reverberance.

In the table below, you can see some examples of preferred EDT values (in seconds) for different types of musical performances.

You can see that the EDT values are shorter for opera performances than for chamber music and symphonic music performances.

This means that you want the early reverberation to die quicker for opera music than for chamber music and symphonic music.

The Sound Strength (G) relates to how loud (or quiet) sound sources might be perceived in a room. In a way, it characterises the amplification power of the room.

You can measure G using an omnidirectional sound source and compare:

The sound strength is measured in dB and usually ranges between 0 and +10 dB in performance venues.

In the table below, you can see some examples of preferred values for different types of musical performances.

What do these values tell us?

The preferred values are mostly positive. This means spaces need to amplify the sound of performances. Which makes sense, especially for the more remote seats where you also want to hear the quieter instruments and sound details of the performances.

The preferred ranges have different upper limits. This shows that each type of performance has its own preferred level of amplification above which music might sound too loud and unpleasant.

The values presented are averages over 500 and 1000 Hz frequency bands (i.e. mid frequencies). At low frequencies (especially around 125 Hz), for symphonic music, the sound strength is preferred to range slightly higher between 3.0 and 6.0 dB. This corresponds to a preference for rather warm reverberation conditions that amplify the base sounds more than the medium sounds.

Whilst the objective Clarity (C80) helps to assess the clarity of musical performances in a space, the Definition (D50, also called Deutlichkeit) is for the intelligibility of speech-based performances.

Note: Musical clarity corresponds to the ability to hear the musical details.

For the C80, you compare the energy arriving within the first 80 ms against the rest of the energy.

For the D50, you compare the energy arriving within the first 50 ms against the total of the energy.

Note: The average duration of speech sounds is around approximately 70 ms.

The Definition has no unit and the preferred values range between 0.3 and 0.7.

The Clarity is measured in dB. In the table below, you can see some examples of preferred values for different types of musical performances.

What do these values tell us?

The metric is an objective measure of two spatial impressions:

For musical performances, the perceived broadening of a sound source and the envelopment are both desired to create a sense of spaciousness. This is largely influenced by early reflections arriving in lateral directions to a listener.

The early lateral fraction energy has no unit. It is averaged from 125 Hz and 1000 Hz and it is generally preferred to range between 0.05 and 0.35.

Other important indices not mentioned above are:

As discussed above, one key design aspect for performance venues is to study the way sound is reverberated inside.

For different listening positions, the acoustic designer works on:

All the above mainly depend on the location and shape of the surfaces within the space, the volume of the space and the acoustic properties of the finishes.